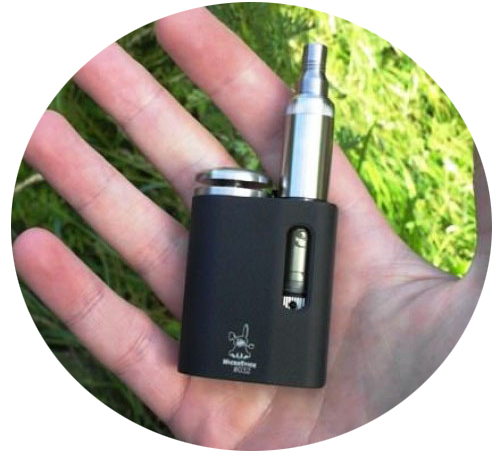 Mods represent the new generation of e-cig technology. More powerful than a standard e-juice vape pen, mods are becoming increasingly popular among vape enthusiasts due to their customizable nature, versatility and ability produce massive vapor clouds. A mod, either mechanical or electronic, consists of two main parts (typically sold separately) a battery and a tank (clearomizer). The specifications and capabilities of batteries and clearomizers can vary greatly depending on what type of vaporizing experience is desired. With so many options and builds to choose from, mods offer a DIY type of satisfaction for users who require more power than typical e-juice vaporizers can provide.

The Question is should we use a mechanical or electronic mod? Mechanical (sometimes referred to as mech), lack any sort of electronics and draw a constant amount of power through a lithium-ion battery within the body of device. Mechs are unregulated, meaning their are no restrictions on its power output. While electronic will give you exact power specifications, mechanical being a bit trickier, as their voltage tends to change over time. Mech also lack any type of safeguards, such as short or overload protection, a feature most electronic mods come equipped with.

While mechanical can be used with standard clearomizers (which utilize a tank and a pre-built atomizer), those who are looking for even more customization and more robust vapor clouds can build their own atomizer. These Rebuildable Dripping Atomizers (or RDAs) require the user to manually construct their atomizer, which involves wrapping coils (typically Kanthal wire) around cotton wicking material. Instead of a tank, RDAs utilize a “drip” system, where e-juice is dripped directly onto the wicks.

Electronic mods are more advanced, and feature internal electronics which allow for variable power adjustment of Ohms, Wattage and Voltage. In addition to giving the user more control over their vaporizing experiencing, these units typically have LED display screens, as well as a multitude of advanced safety features. The voltage output of an electronic mod will dictate what type of atomizer will be compatible, depending on the resistance level. It’s important to know that mods are mostly for advanced users. Without having a good understanding of power specifications and proper usage, they can be dangerous. Make sure to do some research before venturing into the world of mods.